The Tree of Democracy is apolitical, says Tree Lover.  The political controversy is between Umno and Pakatan about who the legitimate State Government is.  Some evil people have already smashed the plaque to commemorate the Perak State Assembly Meeting under the raintree.  Let no evil mind devise any plan to chop down the tree or poison it.

Trees and forests are God’s gift to humanity.  They provide life-sustaining oxygen.  It is believed that the Brazilian forests provide 30 per cent of the world’s oxygen needs.  More, trees beautify Mother Earth with many-coloured blooms and in autumn the kaleidoscopic colours of trees is a sight to behold.

Wordsworth’s elevating nature poetry was written in the company of trees and birds in the Lake District.  In the Garden of Eden there was the Tree of Knowledge.  Lord Buddha attained Enlightment under a tree in Benares.  I was told that the idea of seeking independence for Malaya occurred to Tengku Abdul Rahman when he was seated under a raintree at the Springtide Hotel, Penang.

Very seldom does anyone plant a tree and live to seek umbrage under it.  Jennifer M Granholm, the Governor of Michigan, said: “Sometimes leadership is planting trees under whose shade you’ll never sit.”

So it came to pass that a raintree, probably planted by the British, provided a venue for a historic Perak State Assembly meeting.  It has since been immortalised as the Tree of Democracy.

The Tree of Democracy is apolitical.  The political controversy is between Umno and Pakatan about who the legitimate State Government is.  Some evil people have already smashed the plaque to commemorate the Perak State Assembly Meeting under the raintree.  Let no evil mind devise any plan to chop down the tree or poison it.

Let us reflect on the beauty of the message conveyed by a notice of the Forestry Department of Bhutan:

“The forest is a peculiar organism of unlimited kindness and benevolence that makes no demands for its sustenance and extends protection to all beings offering shade even to the axeman who destroys it.”

Poets have waxed lyrical at the beauty of trees:

I think I shall never see
A poem lovely as a tree.
A tree whose hungry mouth is prest
Against the earth’s sweet flowing breast;
A tree that looks at God all day
And lifts her leafy arms to pray,
A tree that in summer wear
A nest of robins in her hair;
Upon whose bosom snow has lain;
Who immediately live with rain.
Poems are made by fools like me,
But only God can make a tree. 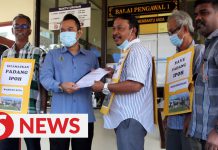 What’s going on at the Ipoh Padang?

A visit to Ipoh reveals a bald truth