The elections are around the corner! In our
cover story, Francis Loh paints a realistic picture of what’s in store
for the various political parties and assesses their chances in the
various types of seats.

Election fever may be infectious – but
realistically, on the morning after the election, what really will have
changed? This is why, he says, it is important to link the electoral
process to the larger struggle for broader participatory democracy.

Mustafa Kamal Anuar then peers into his crystal ball to look at how the media will behave. You don’t need to be a fortune teller to know that the mainstream media will become propaganda organs of the ruling coalition.

Voters should study the track record of the ruling coalition. Martin Jalleh casts a spotlight on the BN government’s record over the preceding year and finds a once looking-good PM, who had the people feeling good, failing to deliver the goods of transparency and accountability.

The BN is actually trapped in a pickle of its own making, says Andrew Aeria. It is high time that  it realises that its model of ethnic and religious politics has reached its “sell by” date. Tong Veng Wye develops the theme by looking at the Hindraf movement as a reminder of our communal dysfunctionality. Many of the social problems that led to Hindraf’s demands are actually shared by the disadvantaged of a variety of backgrounds, he observes.

It’s up to ordinary Malaysians to look at the struggle for justice from a broader perspective. Angeline Loh reports on one such endeavour – a multi-ethnic candlelight vigil on the streets of Penang in support of human rights and justice. 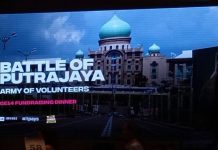