Dozens more have been detained today around the KLCC area in connection with a protest by the Coalition Against Inflation (Protes). Resorting to heavy-handed action to quell peaceful rallies is not the best solution.

All the rakyat want is a fair and incorruptible government. Tunku Yusuf Jewa urges the government to come to its senses before it plunges into a deeper mess – particularly when the general election is just around the corner and the voters have the power to decide who can win or lose.

I hope the public protests by NGOs and Opposition political parties that shook the city or Kuala Lumpur on Saturday 10 November 2007 will serve as a lesson and eye-opener for the BN government to realise that all is not well in this country.

The rakyat have good reasons to be unhappy.  They have the right as citizens to voice out their grouses  and grievances if Malaysia still claims to be a practising democracy.  The government must be prepared to listen instead of brushing them aside as a nuisance and as trouble-makers.

Look what happened to Burma when the military regime tried to strangle its own people.  They lost their voice and were beaten into submission, which eventually led to unhealthy outbursts.

Our government is now faced with an unfamiliar situation, and resorting to force (as the police have done) to quell a peaceful rally is not the best solution.

The recent demonstration at Batu Buruk, Trengganu and later the gatherings at Putra Jaya by members of the Bar Council should be seen as a clear message and wake-up call to the government.  The government must be aware that it cannot simply slam the door in their faces, and seek the easy way out by turning a deaf ear.

The government prefers to give its own spin and the media print anything that  is pleasing to the ears of the government.  Nowadays, the public are smart enough to distinguish right from wrong and they will not swallow any garbage that the BN government is trying to force down their throats.

Telling the people to shut up can be dangerous as sooner or later the bottled-up feelings will erupt into the open.  Street demonstrations are good examples of instances when the Government fails to understand the people’s problems.  In fact, peaceful gatherings should be allowed by the authorities.

The NGOs and Opposition parties may have genuine reasons for wanting to air their grievances.  After all they also represent a large segment of the population.  Is it that wrong if the supporters wish to march peacefully to the King’s palace to hand over their petition?  And that too was blocked by the police!  Some believe that the police have become the tools of their political masters.

All the protestors wanted was a plea for “fair and clean elections”, the NGOs and Opposition were demanding changes in the electoral system.  They felt that the Election Commission was biased and leaning more towards the ruling party.  The government was adamant and has always adopted the attitude that “father knows best”.  This reminds me of the analogy of a strict father who tries to silence his wailing son without finding out the cause.

Many will find it hard to believe that the police never used force on the demonstrators.  I happened to be watching the telecast at home and was surprised to see that the police actually used water cannons and tear gas to disperse the crowd.  I saw three policemen with wooden staffs in their hands going after one demonstrator.  They tore off his yellow jacket from behind and finally dragged him away.  Can the police say that they did not use force but used a “soft approach”?

Police brutality is more like it!  Siva Subramaniam from Suhakam who claimed to have witnessed the goings-on claimed that the police did not use force.  Perhaps when it happened, he was looking the other way.

A crack in society

We are disappointed with the statements made by the PM and his deputy that appeared in the NST on 12 November.  The PM condemned the demonstrators for trying to drag the King into politics and the Deputy PM said that the demonstration was not part of our culture.  Both never explained why the people had to “let out their steam”.  Well, don’t bother.  The government is not sympathetic and has no interest in listening.

I hope the government will come to its senses before it plunges into a deep mess particularly when the General Election is just around the corner and the voters have the power to decide who can win or lose.  Gone are the days voters don’t bother about the choice of candidates but simply support the ruling party.  They know what to look for and they believe if you support a “monkey” you get “monkey tricks”.  All the rakyat want is a fair and incorruptible government.  I pray that Allah will guide our leaders who can set a course that takes us along the right path.

I believe there is a crack in our society and if not remedied the gap could get wider and mayhem could follow if the government is not quick enough to fix it sensibly and rationally. 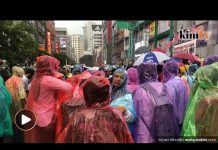