A people’s hearing publicly  identifies those who were guilty of transgressions of human rights and acquits those who had been detained. Julian C H Lee has the story.

On 27 October 2007, some 200 people packed into a small hall at the Selangor Chinese Assembly Hall to commemorate the 20th anniversary of Operasi Lalang. Operasi Lalang is regarded by many in Malaysia as the worst and most self-serving use by the Malaysian government of the Internal Security Act.

In late October 1987, the Barisan Nasional government, headed head by Prime Minister Mahathir Mohamad, directed police to detain 107 individuals across Malaysia on the ostensible grounds that they were a threat to national security by escalating ethnic tensions. These individuals were mainly members of opposition political parties and non-partisan activists, but also included a convert from Islam to Christianity. Commentators and scholars widely regard Operasi Lalang as a naked demonstration of the self-serving use of the state infrastructure by the Barisan Nasional and UMNO.

The official and ostensible purpose of Operasi Lalang was the containment of ethnic tensions between the Chinese and Malay segments of the Malaysian population. These tensions had arisen when the government tried to appoint senior officials who were unqualified in Mandarin into Chinese-language primary schools. Chinese language schools were a point of contention between the Chinese community per se and the Malaysian government. The Umno-dominated Barisan Nasional regarded Chinese language schools as harmful to national unity on the grounds that the language of instruction was not the official national language, Malay.

Rising tension,s which took the form of vigorous protests from the Malaysian Chinese Association, the Democratic Action Party, Gerakan and Chinese eductionists, as well as counter protests by divisions within Umno, were eventually stamped out when the Mahathir administration ordered the detention of 107 individuals under the ISA. These individuals – most of whom had played no role in the Chinese school affair but were otherwise critical of the government – had to endure abuses to both their liberty and their person, including physical torture.

Twenty years to the day after Operasi Lalang began, no one responsible for the abuses that occurred or the arrests that were made in bad faith has been brought to account either legally or electorally. The commemoration was organised by the Malaysian human rights group, Suaram, which had its beginnings in the response of civil society and the friends and families of the detained to Operasi Lalang.

This commemoration took the form of a trial or “people’s hearing” at which the accused was the ISA. Thus, this commemoration sought to ensure that flagrant abuses of power during Operasi Lalang and the sufferings of those involved were not forgotten. Furthermore, it sought to attribute guilt for the wrongdoings to those that civil society regards as the real culprits, not those who were officially vilified.

Because more people than expected attended the commemoration, proceedings were delayed. When proceedings got underway, however, the emcee Zaitun ‘Toni’ Kasim, asked the audience to stand if there was a name attached to the chair on which they sat: 107 stood up, and each of those standing represented an Operasi Lalang detainee. Progressively, people took their seats again when they saw the names on their seats displayed on the projector as having been released within 60 days. By the end of this exercise, some 44 people were left standing, the number of people who received long-term detention orders, and some of these were detained for as long as two years.

Following this and the introductory address by Suaram executive director Yap Swee Seng, three ex-detainees described their experiences during Operasi Lalang. These were Khalid Abdul Samad, Mohd Yusof Husin and Kua Kia Soong. This was followed by pre-recorded testimonials from other ex-detainees such as Irene Xavier and Sim Boh Yu, as well as from family members of people who were arrested.

Common to all these testimonials were descriptions of deprivations suffered and psychological games played by officers. Detainees were interrogated excessively and aggressively. Basics such as bedding and blankets were withheld and for women, sanitary products were intentionally in inadequate supply. Furthermore, basic life rhythms were interrupted by ongoing interruptions to sleep and the perpetual illumination of the detainees’ cells.

Two lawyers who were active in assisting Operasi Lalang detainees – Sivarasa Rasiah and Ngeow Yin Ngee – and one “amicus curiae” – Yeo Yang Poh, former president of the Malaysian Bar – gave their perspectives on Operasi Lalang and the ISA generally.

Sivarasa described a number of the judgments surrounding the use of the ISA and pointed out that one judgement in the case of Theresa Lim Chin Chin v Inspector General of  Police, had an especially negative impact on restraining executive abuses of power. In this case it was found that the subjective satisfaction of the Home Minister that an individual was a threat to national security was enough to make the detention legal. The courts, therefore, did not need to objectively evaluate any evidence to decide whether the detention had grounds or not.

Among Ngeow’s comments was his observation of members of the government: “There is something wrong in these people that they think they can get away with these abuses of power.” Operasi Lalang and the continued existence of the ISA exemplify the larger unaccountability of those in government. In this vein, Yeo noted that in addition to those physically detained under the ISA, “democracy and liberty are also imprisoned”.

When asked to decide the guilt or innocence of the ISA, the audience was unanimous in finding the ISA guilty of grave injustices. Consequently, a list of demands of the government was drawn up.

These, it is worth noting, were demands, not calls for government action or requests. What was evident at the commemoration was an abandonment of faith in the structures of the Malaysian state which ought to have been responsible for the administration of justice and the protection of the citizenry from abuses of power. Instead, these structures were seen to facilitate the opposite.

Twenty years after Operasi Lalang, this commemoration and people’s hearing publicly   identified those who were guilty of transgressions of human rights and acquitted those who had been officially blamed.

Julian C. H. Lee is a lecturer in International Studies at Monash University, Sunway (Kuala Lumpur). He is an anthropologist whose research areas include Malaysian electoral politics as well as gender and sexuality. 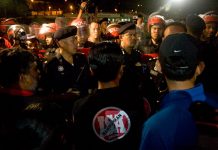 The struggle against the ISA