All the Malaysia Plan documents have classified estate workers as among the poor and disadvantaged sectors in Malaysia. What the government has failed to do is to add specific provisions to regulations regarding termination benefits to provide adequate protection to retrenched estate workers. Jeyakumar Devaraj calls for the law to be amended to protect their rights and welfare.

On 28 September 2007, 30 laid-off workers from six estates in Perak, Selangor and Negri Sembilan presented a memorandum to the Human Rights Commission of Malaysia (Suhakam) asking that the laws and regulations pertaining to compensation of retrenched estate workers be fine-tuned to provide better protection for them.

Nowhere to work and live

Velayutham from Changkat Salak Estate, Sungai Siput (U) Perak, told Suhakam Commissioner Siva Subramaniam that he had worked 25 years as a rubber tapper in the same estate where his grandfather and father also had worked in when he was sacked. Guthrie had wanted to switch to oil palm cultivation and sacked 110 rubber tappers in 1999.

Velayutham described his difficulty in finding another job – given his age (43 then) as factories were not prepared to employ him. Even a chicken farm-owner refused to employ Velayutham saying that foreign labour was cheaper and they worked harder!

Alimuthu from Kamiri Estate in Sungai Siput, also a third generation estate worker, explained that his family did not have a house outside the estate when he was sacked in 1999. Upon retirement, his father, like his grandfather before him, had stayed on in the workers’ quarters occupied by their children on the estate. There was nowhere for him to go when he was given a paltry RM9,576 and asked to vacate his workers’ quarters.

Support the struggle to build a Malaysia based on Justice, Freedom, Solidarity:
READ MORE:  Recalibrating the labour recalibration programme

Why can’t the management give us a few acres so that we could build our own houses, he asked Suhakam. Guthrie has more than 12,000 acres in Sungai Siput alone. A scheme giving lots to all of the affected workers in Kamiri and Changkat Salak would only take four acres he pointed out.

Sugumaran, the son of former Kamiri Estate workers and coordinator of the Estate Workers’ Support Group (JSML-Jerit), explained to Siva that one main cause of the problem is that the large plantation companies have failed to implement the Workers’ Own Housing Scheme, which was launched in 1973 by then prime minister Tun Abdul Razak.

Now 34 years have passed; yet the scheme has only been implemented in 21 out of the more than 1,500 estates in the country, pointed out Sugumaran. Moreover, the NLFCS, a puny plantation company in comparison to Golden Hope, Guthrie and Sime Darby, accounts for the majority of the implemented schemes! Why haven’t plantation giants like Guthrie and Golden Hope, whose annual profits are in the range of RM400 million a year, implemented this scheme, he asked.

Muniandy of Kirby Estate lamented that their attempts to meet the Menteri Besar of Negri Sembilan have all been unfruitful. The workers at Kirby have approached their elected representatives several times but have been asked to wait.

I then brought the attention of the meeting to a press statement by Kedah State Human Resource Committee Chairman Osman Md Aji, who had said, “It is only fair that estates which have reaped huge profits from the services rendered by their rubber tappers provide them with low-cost housing when retrenching these workers” (The Star, 14 February 2003).

READ MORE:  Enact law against violence and harassment at workplace

It is not that the government is now aware of the issue. All the Malaysia Plan documents have classified estate workers as among the poor and disadvantaged sectors in Malaysia. What the government has failed to do is to add specific provisions to the 1980 Regulations regarding Termination Benefits to provide adequate protection to retrenched estate workers. Relying on the “Corporate Responsibility” of plantation companies does not work, I stressed.
Forcibly acquire the land

Munusamy, also a retrenched worker from Kamiri Estate, described how they had approached the Perak State Government to ask it to use the Land Acquisition Act to take over four acres of Guthrie land to be divided and given to the 27 families involved. Although the Act clearly gives it the power to do so, the State Government has refused to use its powers. Just do it in one or two estates, urged Munusamy, and the plantation companies will get the message and stop treating retrenched plantation workers so dismissively.

Siva said that he understood the situation and that he would forward JSML’s recommendations to the Suhakam Legal Reform Committee. He asked that the JSML help out in the drafting of the proposed amendments. 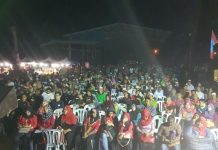