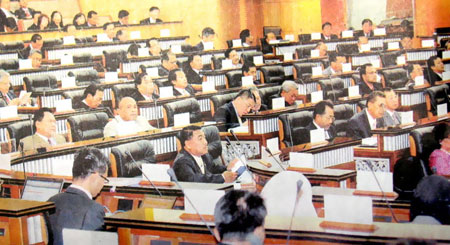 The “leakage” comment by the so-called two dim-wits had the nation aghast and sent shock waves through Malaysian women.  As if this was not enough, very soon after, two more perceived-to-be dim-wits said abnoxious things about women in the Penang State Assembly.  It certainly looks as if deriding women is part of the DNA of UMNO parliamentarians and assemblymen!

The so-called two dim-wits in Parliament did not have the decency to extend an apology to the DAP lady they insulted.  Instead, as it were, with the collusion and connivance of Nazri and Sharizat, definitely birds of a feather, the two so-called dim-wits apologised to all Malaysian women for the crude and barbaric remarks, if they felt insulted.

Nazri dismissed what the so-called two dim-wits had said as a mere play on words!  Dim-wits who show no finesse can hardly be expected to show sophistication in the use of language, let alone show expertise in lexical choice!  Indeed, if some day some one says that if the “r” is dropped from the Minister’s name, and he becomes ‘Nazi”, he should not feel insulted.  Play on letters, mah!

Malalai Joya, a woman member of the Afghan Parliament, utterly frustrated with fellow legislators said: “A stable is better, for there you have a donkey that carries a load and a cow that provides milk.  The Parliament is worse than a stable.”

When the so-called two dim-wits made their barbaric remark, the gleeful thumping of the tables by Barisan MPs clearly confirmed that there are plenty of Barisan MCPs in Parliament.

Support the struggle to build a Malaysia based on Justice, Freedom, Solidarity:
Anti-scumbags

When a Malaysian singer Salamiah Hassan was asked what she would like to be reborn if given the opportunity her reply was, “I would choose to be born as Mahatma Gandhi because he is a peace-loving person.” What a noble choice.

Compare this to Mahathir’s choice of an idol.  Not for him Gandhi, Lincoln or Mandela.  He is on record as having said that his idol is Bollywood star Sharukh Khan!  SK’s song and dance routine consists mainly of chasing some buxom damsel round flower beds and trees in a park.  Wonder if Dr M envies SK  He should not even imagine himself chasing a damsel round trees and playing hide-and-seek, given his heart condition.  It would indeed be life-threatening.

SK is one of about 150 million Muslims, happy and prosperous in secular India.  Wonder if Dr M envies the freedom SK enjoys in India.  SK’s wife, Gauri, is a Hindu and his two children are being brought up as Hindus.  Perhaps Dr M, in his heart of hearts, hopes that one day Malaysia will be liberal, cultured and civilised enough to grant its citizens freedom of choice of religion as guaranteed in the Malaysian Constitution.

When SK was asked about the possibility of his entering politics, he replied, “I am not interested in selfless work.” Perhaps, after all, SK and Dr M have something in common.


With regard to the Ijok by-election, Najib said, “We won the by-election fair and square.”  Only a real square, indeed a  a nitwit, or someone with a hole in the head (to borrow the PM’s expression used in another context) and a leak between the ears would say that elections in Malaysia are fair and free.

The 1956 Reid Commission Constitution recommended that urban/rural weightage should be 2:1 in the delineation of constituencies.  That was gotten rid of through a constitutional amendment and now some rural constituencies are between 8,000 – 12,000 voters whereas some town/city constituencies are 200,000 – 250,000 in voter strength thereby making the urban vote 1/10 or 1/20 of a rural ballot.  Fair indeed!

The Chairman of the Election Commission can prevent many of the malpractices and abuse of power committed by the Barisan – phantom voters, postal ballot manipulation, vote buying, uncontrolled expenditure by ruling party candidates and wholesale bribery of voters – huge government funds made available instantly for roads, schools, sewing machines, bicycles for schoolchildren etc. etc.  the shameless use of government machinery and personnel is patent to all.

Compare this scenario to India where political parties and candidates are in fear and trembling because the EC monitors everything strictly during elections.  Remember, India Gandhi, the Prime Minister, ending up in the lock-up for using a government helicopter for electioneering purposes.  If such were the case in Malaysia the entire Cabinet plus the Mentris Besar and Chief Ministers will be behind bars!

The print and the electronic media is government controlled and it shamelessly uses them for Barisan propaganda throughout the year.  The opposition has no chance to present its view and the Barisan successfully cuts out all dissenting views.  Compare this to Australia, for example, where if a government Minister is given fifteen minutes of radio and tv time, the opposition is given equal  amount of time to present its views.  Only in this way can we create a civil society, a thinking society.

While the Barisan makes use of every facility both public and private for its political propaganda, the opposition parties are prevented by law from making available to the public their party publications.  The way the Barisan controls the mass and electronic media one would think they are paid for by Barisan supporters!

During election time opposition parties experience tremendous problems in obtaining police permits for their rallies. The Barisan has no such problems.

The Registrar of Societies literally takes ages to approve registration of opposition parties.  Remember, UMNO was deregistered and UMNO Baru submitted its application for registration on a Saturday and the ROS gave the approval the following Monday!  How efficient.

Come to think of its, Kg Talam, Machap and Ijok benefited tremendously by the mind-boggling amount of money pumped in by the Barisan to win the by-elections.  In Ijok alone it is alleged the Barisan spent RM100 million.  Samy Vellu shamelessly admitted that what would have taken ten years was achieved in ten days in terms of development – land titles, paved roads, gift of sewing machines, computers etc. etc.  If this is not despicable bribery of the voters, what is?

Given this scenario, very peculiar to Malaysia, politicians achieve more in their death than in their political life.  Would it not be a good idea if we had ‘Buy Elections’  in each of the 193 parliamentary constituencies?  It would not be compassionate to ask our yang Berhormat to die at well spaced out intervals but if they can so arrange their political death, they would render a very great service to their ex-constituencies.  Just imagine.  If our MPs can achieve this, there would be no necessity for the Ninth Malaysia Plan!


Constitution: The supreme law of the land

The Judges take the solemn oath to defend the Constitution but some of them pass judgements that are so atrocious that one wanders how on earth they got elevated to the Bench!  Some of them are not able to write judgements and so justice is either delayed or denied.  Believe it or not, such judges get promoted and so the legal and judicial system remains screwed up.

The judgements passed in respect of one non-Muslim spouse converting to Islam and converting the children and apostasy cases are frighteningly wrong in law.  Article 11- Freedom of religion states: “Every person has the right to profess and practise his religion, subject to Clause (4), to propagate it.  No one is permitted to forcibly convert Muslims to another faith.  If the framers of the Constitution had intended to deny Muslims religious freedom, they, in their wisdom, would have clearly stated this in Article 11.  They, in their wisdom, probably paid heed to a higher law in the Koran that categorically states that in Islam there is no compulsion.

Take for example, judges asking non-Muslims to go to the Shariah Court to seek redress in the case of a spouse, mainly men, converting to Islam as well as converting the children and apostacy cases.  In fact, such judges are asking non-Muslims to do something illegal.  The Shariah Court was set up to handle cases involving Muslims. Period.  These judges act with impunity.  They are answerable or accountable to no one and so they literally get away with  the murder of our Constitution, which is supposed to be sacrosanct.

With regard to apostacy, there is nothing in the Koran that recommends punitive measures, let alone death, for Muslims opting out of the religion.  It is clearly in the Koran that in Islam there is no compulsion.  This is confirmed again and again by renowned Muslim scholars and religious experts.  The government extols the virtues of Islam Hadhari but the stark fact, ironically, is that since its introduction the position of non-Muslims to spousal conversion as well as converting innocent and ignorant (in religion) children and non-Malays wanting to opt out of Islam has dramatically worsened.

Thus far, the government has remained deaf and dumb to the growing concerns of non-Muslims.  No attempt has been made to rectify injustices through legislative measures or constitutional amendments the many festering injustices.  The Shariah Court came into existence through a constitutional amendment and not the other way round.  In 1988 a half-past six PM, who had neither the intelligence nor the wisdom to realise what injustices it would unleash, initiated the constitutional amendment.  Later he had the cheek to say proudly that he got away with such a ruinous amendment.  The so-called protectors of non-Muslim interests — the MCA, the MIC and Gerakan demonstrated, as always, that they had nothing between the ears by keeping their mouths shut and resting on their bums.  If one is looking for political eunuchs he only has to look at these chaps.

It is about time, would-be judges faced an all-party parliamentary committee to be questioned on their stand on issues such as conversion to Islam of a non-Muslim spouse, the forcible conversion to Islam of children by the converting spouse, rape domestic violence, sexual harassment, single mothers, alimony payments especially by Muslim husbands, rights of gays etc. etc.  In addition, they should be required to sit for a test to determine their understanding of the Constitution.  If an IQ as well as an English test can be added, it would help tremendously the selection process.

The case of Moorthy, Subashini, Suresh and Revathy and Lina Joy and others clearly indicate the failure of the presiding judges to interpret the Constitution correctly.

Only a person with a hole in the head and a severe leakage between his ears would call the judgements in respect of the above cases just.

Originally published on aliran.com on 17 August 2007