We should stop this practice and instead infuse international affairs with compassion and concern for the human being, says K Haridas.

The agenda ultimately sets the tone for action. This provides the context within which decisions seem to be made. The underlying intentions and motives which are often well disguised then drive these meetings and set into motion clear targets and goals. The whole process then assumes a life of its own. It is driven by a momentum that gets many other interested parties to jump on the bandwagon. It is always an ‘us’ versus ‘them’ agenda that is presented on a moral high ground to win support.

The war on terrorism is a case in point. As soon as the agenda is set it is then globalised. Either you are with us or against us. For various motives, several countries then jump on the bandwagon; others are forced to sign in and the battle is on. It is a war on terrorism and it is sold on such terms as ‘evil’ to dehumanise the ‘other’. With all the media and press coverage, the agenda moves forward with good intentions hiding bad motives.

This benefits the war mongers, the weapons industry and those who feed the notion of violence. Violence begets violence and soon the very terror that you imagined becomes an imposing reality. The war mongers who have decided to use violence to deal with this threat create the very monsters that face them. Lives are lost. Violence takes on a momentum of its own. This breeds greater violence and, naturally, the chain of hate extends, breeding new terrorists to support the cause.

What if the context were different? If the agenda was ‘an end to terrorism’ then this would have been a more inclusive approach. The underlying issues that generate terrorism would also have surfaced on the agenda in addition to the need to deal with terrorism as a modus operandi to achieve goals. An end to terrorism is a concern for all. If the ‘other’ knows that his or her concerns are on the table, then we have an opportunity to dialogue, to negotiate and to bring about change.

It is akin to learning about ‘illness’ to understand ‘health’. Such a context will not get us far. Health, if it is to be understood, has to be studied in the context of health and the preventive measures that should be in place to ensure that the health and well being of people are safeguarded. With over 100 million people dead as a result of wars, when is humanity going to learn that there is a better way than violence.

Such a perspective can only thrive when we have a more compassionate view of the human being. The ‘other’ is at best and at ‘worse’ a being like me. Whatever may be the distinctions based on geographical locations, language, ethnicity, colour, class or religion, the ‘other’ remains a human being. I create the monsters that I want to deal with by my very response.

Once we demonise the ‘other’ then somehow we seem to find it easier to liquidate the other, mistreat the other and subjugate him or her to all sorts of torture and terror in the name of fighting terrorism. The same means are used by the perpetrators and the defenders. Both devalue ‘life’. Many of us unwittingly become victims of this demonising process either because of our own ignorance or for having bought into this ‘us’-versus-‘them’ strategy. Poverty, social tensions, inequality and the siege mentality drive people into hopelessness. Terrorism is often born out of such hopelessness. This is why the notion of human security is critical if sustained peace is to become a reality.

It is this demonising of the ‘other’ that has to stop. Without compassion this is not possible. This seems to be a quality and a factor that is missing in international affairs. Only the likes of HH The Dalai Lama or Archibishop Desmond Tutu emphasise this critical factor. Compassion is a quality born not from a reasoned mind. It is a heartfelt quality that has to be infused into the agenda if we want to see a difference in international affairs. 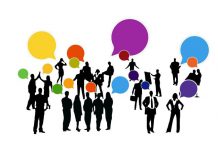 Everyone is talking – but is anyone listening?