Bloggers are very much in the news these days after the official warning to the mainstream media not to cite the Internet media and blogs. Mustafa Kamal Anuar reports on a unique event that brought together bloggers, webmasters, and civil society activists.

Advancements in information and communications technology (ICT) – particularly the convergence of media, information technology and telecommunications – offer hope for many people. This is especially true for those who perceive themselves as being marginalised by the powers-that-be and spurned by the mainstream media. This development in technology is generally seen as having an important potential in promoting freedom of expression, media freedom and the further democratisation of society.

To be sure, sceptics have cautioned that the liberating potential of ICT is often riddled with problems and challenges posed by political and economic forces in society that jealously guard and promote their own vested interests. All the same, many ICT users, especially those who use the Internet, feel that despite certain setbacks to freedom of expression on the web, the technological advancement we have experienced does open the door much wider.

In Malaysia, the Internet initially surged in popularity at the end of 1998 with the emergence of the Reformasi movement, sparked by the unceremonious dismissal of the then deputy premier Anwar Ibrahim. Social and political activists then set up hundreds of websites to provide alternative information and views especially for those who were suspicious of the credibility of the mainstream media. Although many of these websites have become defunct over the years, a few of them persist and many more new sites and blogs have mushroomed to provide alternative information and opinions about current issues and problems in Malaysian society.

In recognition of the important role played by some of these websites and blogs in Malaysia, Charter 2000-Aliran, with the support of the Southeast Asian Press Alliance (Seapa), held a ‘National Roundtable on Internet Media in Malaysia: Problems and Prospects’ in Penang on 9 December 2006.

The aim of the roundtable was to gather a selected group of actors involved in alternative communication and to discuss issues and challenges  that confront them such as the technical problems of managing blogs and websites and the government’s proposal to set up a media council. Participants were also expected to assess the extent to which the Internet promotes freedom of expression and empowerment for groups and individuals who had been marginalised by the authorities and the mainstream media. It was also hoped that the event would forge a network for future cooperation not only among Internet media practitioners but also with civil society groups, which have limited access to the mainstream media.

The 24 participants at the roundtable comprised bloggers, website editors and  activists from civil society groups that have websites of their own. The meeting provided an opportunity for a few established bloggers to meet up with several new entrants to the blogging world and allowed the former to share their experiences with the latter.  Participants were also able to share their uncertainties and their trials and tribulations of running blogs and websites. Participants at the roundtable were involved in a range of issues such as education, disabled people, women, human rights, media freedom, trade union activism, science, politics, economics, and culture to religion.

One of the concerns that was raised in the meeting was whether blogging was indeed a virtual and democratic space where concerned citizens could express their opinions on important public issues. Or was it merely a platform for a person to express very personal opinions that mattered less to others in society? In response, one of the participant narrated a story of a young couple whose blogs started off as an innocuously romantic exchange but later blossomed into something ‘political’ when both of them encountered problems with the authorities over a certain matter. Their political awareness was further enhanced with responses from others to their regular jottings on the Net.

Blogs are useful even if they are purely personal, but there is always a possibility that they could become more ‘political’. Even the most ordinary things, a participant observed, like an advertisement for the sale of a car video involved making a public announcement on the Internet. The participant went on to say that most people are unaware of infringements of the right to free expression until they personal experience  the violation of their own right to free speech. Direct denial of this human right creates awareness of its existence. There is indeed a need to connect personal experience with the  human rights discourse.

It was generally felt that the Internet does provide space for information and views that are deliberately pushed aside by the mainstream media particularly in Malaysia. The Internet media could also provide a space for the promotion of human dignity over the values of corporate profit-maximisation prevalent in the mainstream media. It was felt that Internet media have a social responsibility to identify the real causes of and solutions to socio-economic and political problems.

An activist from an NGO  that advocates a ban on the pesticide paraquat stated that the Internet is a useful means for human rights advocacy. The civil society campaign to achieve reinstatement of the ban on paraquat, we were told, was a human rights issue that turned political. The government, she insisted, had been influenced by interests of the agrichemical multinational corporations, which  led to the lifting of the ban.

Many participants were also concerned about the credibility of the Internet media run by some Malaysians. They felt that there ought to be certain ground rules to ensure that the freedom that Netizens are now enjoying will not be abused to the extent that the credibility and image of the virtual community as a whole is smeared. At the very least, such dos and don’ts could put them apart from other websites and blogs that are intentionally racy, malicious, pornographic, unaccountable, and undemocratic.

Apart from showing the way to ‘popularise’ one’s blog through links to more established and popular blogs, one participant who is an established blogger gave pointers on how to create and maintain credibility. Blogs have to be regularly updated to ensure visibility, freshness of content and capture the interest of visitors. The experienced blogger also cautioned other bloggers to exercise care and concern when managing comments by visitors. A blogger should also carry out research especially if and when she decides to comment on a politically contentious issue.

Given the stifling and restrictive political and legal structures in the country, which  constrain freedom of the media and of expression, participants stressed the importance of maintaining a substantial degree of credibility in their blogs and websites. This would not only enhance their public standing but also keep away any possible unnecessary interference by the authorities. Mindful of the situation, participants also felt that cooperation among themselves would be vital and useful in their collective pursuit of social justice, freedom of information and communication, and further democratisation of Malaysian society. 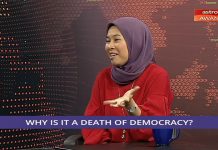 Who are ‘the Rakyat’?