Koon Yew Yin takes a look at why Abdullah Badawi may have changed his mind over the proposed cross-channel link to Singapore.

I am well aware that many people including our previous premier Tun Dr Mahathir and our current Prime Minister, Abdullah Badawi, have expressed their opinion for and against the construction of the scenic or crooked bridge. Everybody is entitled to his or her own opinion. Bearing that in mind, I do not wish to bore you with any more similar arguments. However, as an old Chartered Civil Engineer, I think I know that there are some insurmountable technical difficulties, which the promoters may not have considered and should be interesting to you and all those concerned.

If we had Singapore’s cooperation to build a full-length bridge, the technical problem may be easier to overcome. But to just build half the bridge – I think the problem is quite insurmountable. Before I proceed, you may like to know what actually transpired in the Singapore Parliament that convinced our Prime Minister to change his mind. Singapore’s Second Foreign Affairs Minister Raymond Lim said that Malaysia did not have the right to unilaterally replace its half of the causeway with a bridge without the concurrence of Singapore. He reminded Malaysia that in 2003 it had applied for an injunction to the International Tribunal of Law of the Seas (ITLOS) to stop Singapore’s reclamation works when these works were carried out in Singapore’s sovereign territory.

While rejecting Malaysia’s application, ITLOS had ruled that all future engineering works in the Johor Straits would henceforth be subjected to the scrutiny of two countries. This rule is premised on the principle that works in one sovereign territory in the Straits could affect the other.

What about the railway?

Our Government must have woken up to the fact that it could not avoid the legal battle with Singapore if we went ahead to build half a bridge to replace half the causeway. Without Singapore’s agreement, how could we remove the existing pipeline and the railway on the causeway? Apparently, according to the separation agreement, when Singapore broke away, we were obliged to provide uninterrupted water supply and the maintenance of the railway to Singapore. If we stop running trains into Singapore for a certain period, Malaysia would lose all the railway land in Singapore. This is a very serious consideration, which I think our promoters did not take into consideration. However, I doubt if there was any cost-benefit study for the project.

From the picture as published in the newspaper I did not see any provision for the railway. Bearing in mind that trains, unlike motor vehicles, cannot take sharp corners or climb steep gradients, I think it is technically very difficult or impossible to design a bridge spanning half the causeway and to comply with these conditions. Moreover, the crooked half bridge would look queer and would likely attract ridicule than admiration if it could be built. One thing is sure. If we had gone ahead with the construction without Singapore’s agreement, there would have been a legal battle. 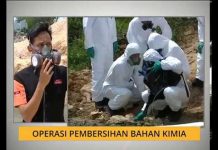